I’m sharing another instalment of my Mini Review Mondays, after continuing it last week! In case you haven’t seen any of my previous posts, I do ‘mini’ reviews of books that I’ve read, loved and usually promised to review ages ago.

Today, I’m focusing on two brilliant stories that I was lucky enough to read early via Netgalley, starting with the complex, dark fantasy The Sisters Grimm.

As children, Goldie, Liyana, Scarlet, and Bea dreamed of a strange otherworld: a nightscape of mists and fog, perpetually falling leaves and hungry ivy, lit by an unwavering moon. Here, in this shadowland of Everwhere, the four girls, half-sisters connected by blood and magic, began to nurture their elemental powers together. But at thirteen, the sisters were ripped from Everwhere and separated. Now, five years later, they search for one another and yearn to rediscover their unique and supernatural strengths. Goldie (earth) manipulates plants and gives life. Liyana (water) controls rivers and rain. Scarlet (fire) has electricity at her fingertips. Bea (air) can fly.

To realize their full potential, the blood sisters must return to the land of their childhood dreams. But Everwhere can only be accessed through certain gates at 3:33 A.M. on the night of a new moon. As Goldie, Liyana, Scarlet, and Bea are beset with the challenges of their earthly lives, they must prepare for a battle that lies ahead. On their eighteenth birthday, they will be subjected to a gladiatorial fight with their father’s soldiers. If they survive, they will face their father who will let them live only if they turn dark. Which would be fair, if only the sisters knew what was coming.

So, they have thirty-three days to discover who they truly are and what they can truly do, before they must fight to save themselves and those they love.

I really liked this compelling, intricate fantasy that puts an original spin on tales that you think you know. I felt like Praag captured that dark edge that the original Grimm tales had, yet added her own unique flavour to them that drew me in.

There are quite a lot of perspectives in this book, creating a sometimes tangled narrative but I loved being lost in Praag’s prose. It’s somewhat fragmented and confusing but just sweeps you into this web of words. Her writing was just beautiful. Every character did feel distinctive, especially the four sisters and how their representation of the different elements fed into their personality.

I really liked how she incorporated astrological elements, dreams and really well-imagined fairytales into one magical story. It very much felt like a love letter to womanhood and the power that comes with that, weaving together our collective magic to unite those we’d thought to be lost. This is a deeply feminist story without becoming preachy and I really enjoyed it!

Also, Praag’s world-building was excellent, imaginative and rich, so I’m keep to explore more of this world in the sequel.

Next, I’m discussing the similarly dark and utterly riveting My Dark Vanessa, which is out on the 10th March. 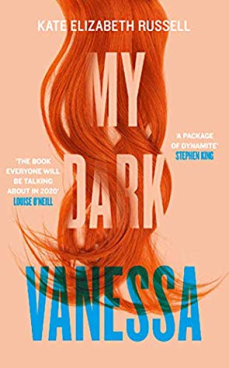 Vanessa Wye was fifteen years old when she first had sex with her English teacher.

She is now thirty-two and in the storm of allegations against powerful men in 2017, the teacher, Jacob Strane, has just been accused of sexual abuse by another former student.

Vanessa is horrified by this news, because she is quite certain that the relationship she had with Strane wasn’t abuse. It was love. She’s sure of that.

Forced to rethink her past, to revisit everything that happened, Vanessa has to redefine the great love story of her life – her great sexual awakening – as rape. Now she must deal with the possibility that she might be a victim, and just one of many.

This is no way an easy read, providing a thought provoking portrayal of one of the biggest issues of our time, but at times, I felt like I had to force myself to continue reading.

Strane is clearly a manipulative abuser, but through Vanessa’s first-person narrative, we see that she believes that there may be more to him. It’s heart-breaking to witness his utter control and manipulation of her at such a young age. Her relationship with him appears to define her life in such a irrevocably disgusting way. Russell explores the narratives behind the #MeToo movement with clear sensitivity and research, but in a deeply disturbing way that questions Vanessa’s own victimhood that unfortunately the modern press may also do. She herself cannot seem to accept that she was a victim, though Strane’s gaslighting and rewriting of her memories sure plays a part in that.

I liked how nothing in this book was particularly clear-cut, showing the reality and messiness of the situation, even to the very end. The writing was superb, extremely compelling and immersive. It tackles how we are complicit as a society in rape culture and asks us to respect the victim and their control over their own narrative.